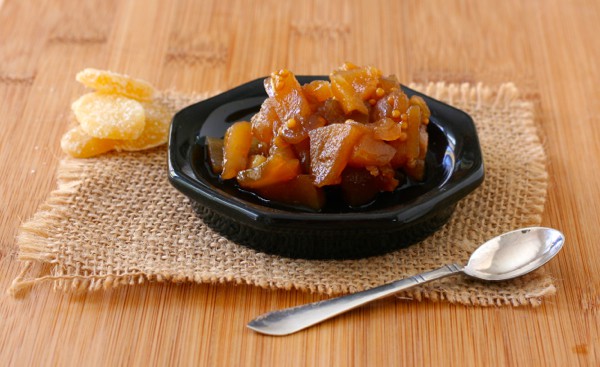 My newest chutney, Triple Ginger & Pear, features seasonal pears and three different kinds of ginger, one of my favorite flavors.

Bartlett pears are at their peak right now, and I used seven or eight in this batch of chutney. Adding some dried pears helps intensify the pear flavor of the chutney.

I’m such a fan of ginger, from cocktails to baked goods. I love to snack on a handful of peppery crystallized ginger slices. Maybe I got hooked as a kid, when my mother would bring me a ginger ale – with a straw – to settle my stomach. In those days, ginger ale contained real ginger, something you don’t find now in most commercial ginger ales. (Trader Joe’s sells a terrific “real” ginger ale.)

Recently, I was in an expensive food shop, actually a branch of Harrod’s at London’s Heathrow Airport, and I spied a jar of ginger jam. It was heavy and super expensive, so I made a mental note to try to make a batch after the trip. A future post, maybe…

Looking back at earlier chutney recipes that I have posted here, I see that I used white sugar for most of them. Some time ago, I made a switch to using brown sugar and prefer the depth of flavor.

LtC TIP: Use your handy rasp to grate the fresh ginger root, once you have peeled it.