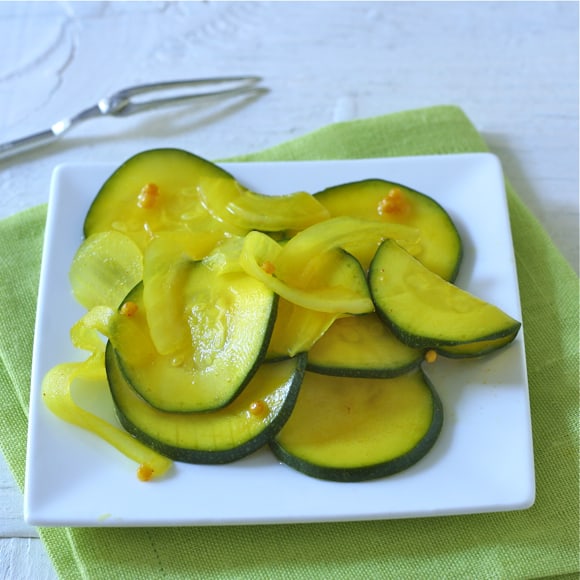 Bread-and-butter pickles are my absolute favorite pickle, hands down.

When I was a little girl, my mother made bread-and-butter pickles during the short summer season when pickling cucumbers flooded the local farmstand. My aunt and her husband would drive to Pennsylvania from New Jersey, my mom would drag out her huge meat slicer, and the four adults set up a pickle production line in our crowded kitchen. It was an all-day affair, slicing the cucumbers, brewing up the brine and filling the quart jars with hot pickles.

For some reason, maybe because it was such an ordeal, my mother and father never made pickles when they retired and moved to San Diego. Even worse, after they had passed away, I was unable to find the original recipe for those pickles, which dated back to my maternal great-grandmother. I guess I need to try some other recipes, but my heart isn’t really into it.

Still, when I saw an easy recipe for quick zucchini bread-and-butter pickles in the current issue of Food & Wine, I decided to try it. I had everything on hand and was craving those pickles.

Unfortunately, the first batch of pickles were disappointing, not sweet enough and way too salty. The sharpness of the vinegar in the brine hit the back of my throat and made me choke. I threw that batch away and started over, after a trip to the store for more zucchini…

This batch, I cut back on the salt and doubled the sugar. Because these are refrigerated pickles, not canned, I wasn’t concerned about the salt-sugar ration, only in terms of taste. Next time, I will throw in some chopped fresh dill. These aren’t as good as Mama’s pickles, but they are a step in the right direction.

TIP: I sliced the zucchini using my handheld OXO mandoline at its widest setting.