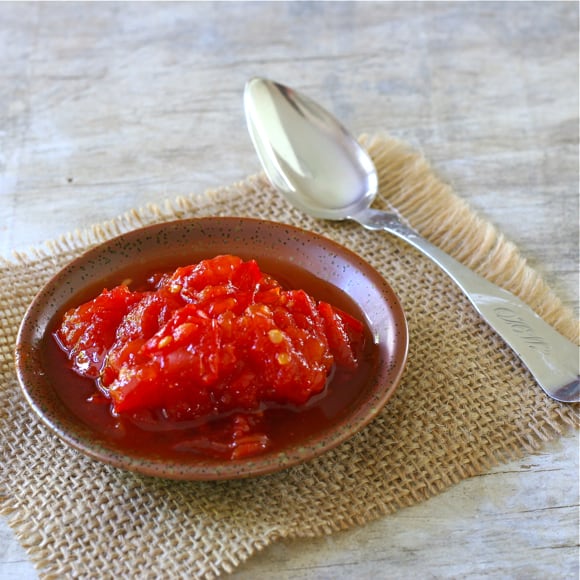 When I saw a simple recipe for tomato jam in the current issue of  Fine Cooking, I knew it was time to hit the farmers market for some beautiful local tomatoes.

I headed across the bridge to my favorite little market, held in Coronado every Tuesday afternoon. Despite its small size, it’s a jewel of a market with vendors selling either all organic produce or, at least, pesticide- free.

Don’t be afraid to ask for a sample, especially when you are buying four pounds of tomatoes. As it turned out, the local Carlsbad tomatoes tasted better than the heirlooms, and were half as expensive.

The idea of peeling and seeding all those tomatoes seemed awfully tedious, so I was relieved when my friend Wendy, a professional jam and preserve-maker, suggested I skip both steps. The fruit was so gorgeous that I didn’t want to waste a drop, to tell the truth.

I had seen another recipe recently on social media for tomato jam, one that called for lemon juice, fresh ginger and cinnamon. This all sounded good to me. I cut back on the salt, using only 1/4 teaspoon, since we watch salt at our house. Last minute, I subbed 1/2 cup of brown sugar for some of the white called for in the original recipe. In retrospect, I wish I hadn’t added the 1/4 cup water in the original recipe because my tomatoes produced tons of juice.

The result was a bowl of sweet-sour tomato-y sludge that Larry and I both went at with spoons once it had cooked and had its beauty shot. Drizzle this on ricotta-topped crostini, inside BLTS, on homemade pizza and anything that calls for ketchup.