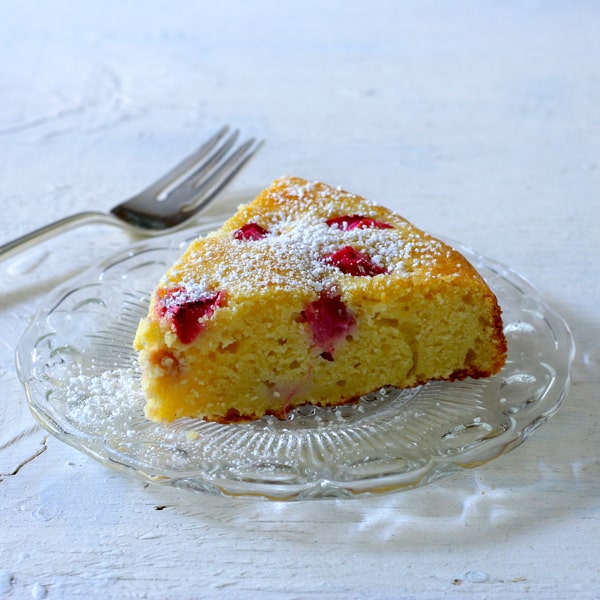 This easy rhubarb ricotta cake is going to surprise my rhubarb-loving husband, Larry, this evening. Although his birthday isn’t until next Thursday, we will be in Santa Fe that day, so why not start the celebration early?

It was no easy feat to actually get my hands on some rhubarb. I have been looking in all the markets for several weeks, this being the season for it. Finally, I found some yesterday at a local supermarket – for $6.99 a pound! I was desperate enough that I bought some, knowing I only needed a cup and a half of the precious stuff.

Some years ago, when Larry and I were newly in love, I tried to grow some rhubarb in the garden. It was a miserable flop, since it turns out you need to live in a climate that has frost during the cold months. Where we live in San Diego is a no-frost zone, so I gave up on my efforts to raise “pie plant”.

I switched out the strawberries for rhubarb, using on my Strawberry-Ricotta Cake recipe. I used 1 1/2 cups of rhubarb instead of 1 cup of strawberries, knowing how much Larry loves rhubarb.  You can get the recipe here.

Happy Birthday to my Midwestern sweetheart xoxo Next time, a pie – I promise!