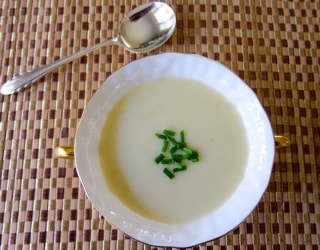 My Dad always liked to celebrate Bastille Day, so this is published in his honor. Anyhow, Vichyssoise originated in France, n’est-ce pas?

I remember both my mother and grandmother serving Vichyssoise when I was a kid. It was a wonderful starter for warm weather dinner parties. Of course, I wouldn’t touch it then…

We enjoy leek and potato soup and it is the recipe I make over and over during cool weather. Now that it is July, I have turned to chilled soups and decided to revisit this classic French soup. My recipe has evolved over the years and I have no idea of its origins, but suspect it came from Fanny Farmer. Using homemade or reduced sodium chicken stock limits the salt without cutting back on flavor.

This soup tastes better as it sits, so try to make it a day ahead of serving. It is hearty enough for lunch or a casual supper, unlike many cold soups. I like to garnish it with chives from the garden.

TIP: Slice the trimmed leeks lengthwise before washing to insure removing the grit.

TIP: Invest in an immersion blender to simplify your prep. Mine cost about $25.

2. Add the diced potatoes and chicken stock. Reduce heat to medium-low, cover the pot and cook until potatoes are easily pierced with a fork, about 20 minutes.

4. Using either an immersion or standing blender, puree the soup until smooth. Add salt and/or pepper to taste.

6. Stir and serve cold with a garnish of chopped chives.