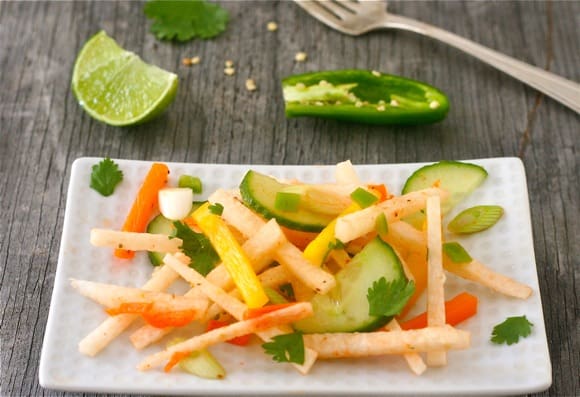 My dear friend Jan and I recently returned from a trip to Taos and Santa Fe, where we were treated to an incredible show of fall color, so typical of northern New Mexico in October. Neither of us could remember a more beautiful visit there, especially along the high road between Taos and Santa Fe. I shot this just outside our lovely room at the Taos Inn. 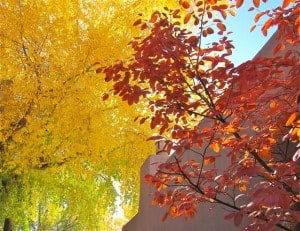 Of course there was shopping and museums, but we also made our way down the list of must-visit restaurants of the region. Doc Martin’s at the Taos Inn is always a treat, and the tapas at El Farol on Canyon Road in Santa Fe are not to be missed. Maria’s is great for traditional New Mexican cuisine, and we can never get enough of the green chili and sopapillas at the Plaza Café on the plaza downtown.

Just before we headed back to Albuquerque and the airport, we shared a burger smothered with green chili at the Blue Corn Café off Water Street. It came with a side of jicama slaw that inspired this post.

I drew inspiration from two recipes in the Santa Fe School of Cooking Cookbook, replacing cabbage with jicama, adding cilantro for a fresh touch, and tweaking some other ingredients and measurements. As you can see, I added some spice which had been missing from the slaw I sampled in Santa Fe.

Poor Larry is neither a fan of jicama (“tasteless”) or cilantro, claiming it tastes like soap. The jalapeno and sriracha sauce scared him off as well. But no worries – the pinenut bark I brought him from Senor Murphy’s proved an excellent substitute…