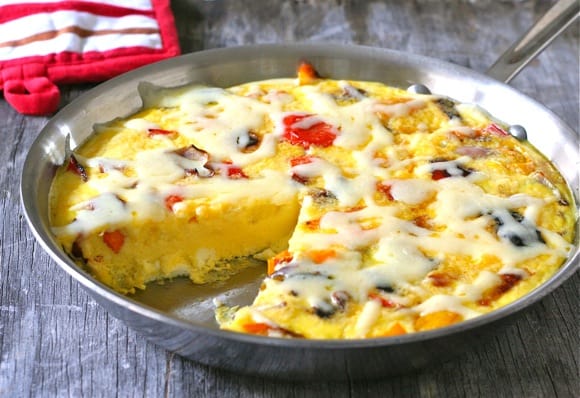 It had been ages since I made a frittata. With friends coming for brunch a few weeks ago, I was bored with the idea of making my usual torta. Leafing through Ina Garten’s “How Easy is That?” cookbook, I decided to try her “Roasted Vegetable Frittata”.  As with most of Ina’s recipes, it came together as promised and was a hit at brunch.

These days, however, I am determined to drop some weight and am religiously counting calories. Because I love to cook, it seems a double punishment to both diet and stay out of the kitchen. So I decided to rework the recipe as a roasted pepper frittata, a healthier version with fewer calories, fat and salt.

Subbing low-fat milk for the half-and-half was an obvious move. I hadn’t been crazy about either the garlic or zucchini in Ina’s recipe, so out they went. I used Fontina in place of the Gruyére, just because that’s what I found in the fridge. The original size of the chopped vegetables had seemed too large, so I chopped them smaller, into 3/4-inch sized pieces. Cutting back on the oil and switching out the butter for a bit of the oil saved some more calories, and my streamlined recipe was ready to go – and turned out to be a home run at supper last night.

TIP: If you are fortunate enough to have a Trader Joe’s in your neighborhood, they sell a package of three peppers, red, orange and yellow.