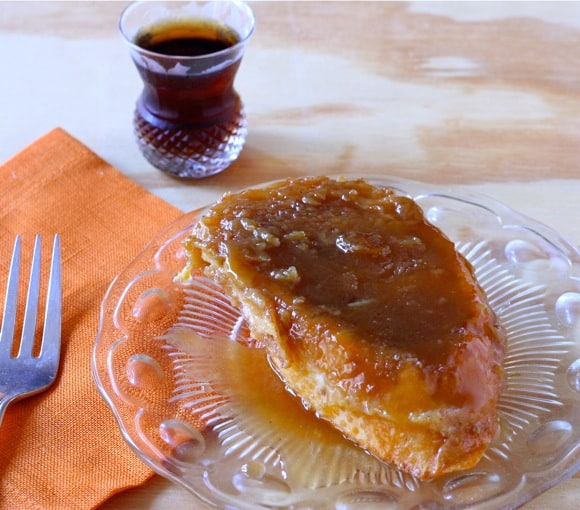 Recently, Larry and I were guests at the lovely Hazan Inn Bed & Breakfast in Phelps, WI. Each of our four mornings, we were treated to fabulous breakfasts, made by hostess Janet and served by our host Joel. We were waited on hand and foot while Janet outdid herself preparing luscious baked goods, tempting fruit salads and hot entrées.

When I learned that Janet had published a cookbook of her favorite breakfast and brunch recipes, I had to have a copy, of course, for my ever-growing collection of cookbooks. It was hard for me to decide exactly which recipe to make first, but I finally settled on this scrumptious caramel French toast.

What a perfect recipe to make for guests, as the dish can be assembled the night before and is baked as a casserole, avoiding the need to play short order cook and grill each serving of French toast. I opted to use my 7 1/2 x 11 1/2 – inch baking dish instead of the 9 x 13 inch-size that Janet recommends. In retrospect, I wouldn’t do this again. I should have listened to Janet’s advice! Me and my big ideas…

I also added half of a scraped vanilla bean, in addition to the vanilla extract, just because I am a vanilla freak. Be certain to soak up all the egg with the baguette slices. And if you want to go over the top, drizzle a little pure maple syrup over the top of each serving.

This week marked my third anniversary as a food blogger. Many thanks to all my readers who never fail to inspire, encourage and support me in my efforts. See you next week!