Home » Side Dishes » Eat Your Greens! Rainbow Chard with Raisins and Cashews 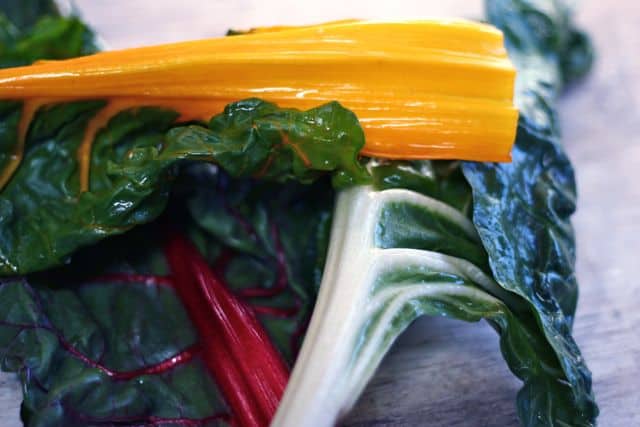 There were no winter greens at our house when I was growing up, let alone rainbow chard. Winter vegetables were frozen – peas, limas and string beans dominated the supper rotation, since fresh green vegetables were hard to come by during Pennsylvania winters. Like many kids, I dutifully chewed the mandatory “three bites” and then eagerly turned to the rest of my plate.

Having lived in California for over 30 years, you would think I would have discovered winter greens such as rainbow chard ages ago. Our local farmers markets are loaded with beautiful kale, chard and other leafy winter greens. Even the supermarkets are selling more and more winter greens once the weather begins to cool. My friend Lynda  turned me on to kale chips last year, and the “green potato chips” won Larry’s heart as well.

So, my romance with kale is only a year or so old, but these days I have begun flirting with Swiss chard. I’m crazy for the rainbow chard that I find in our farmers markets. I’ve learned to ignore recipes that instruct me to cut out  and discard those beautiful center ribs. Just chop and sauté these little jewels a few minutes longer than the leafy greens.

Larry will eat almost anything that has plump raisins tucked into it and is studded with toasted cashews. Almonds would work here too, but I had a bag of cashews in the freezer and “Eat Your Greens! Rainbow Chard with Raisins and Cashews” came to be.

TIP: Use a small skillet and no oil to toast the cashews. Watch carefully to avoid burning them. Your nose will alert you, so “listen” to it.

1. Using a small skillet, cook the cashews over medium-low heat, stirring, until toasted, 3-5 minutes. When cooled, roughly chop and set aside.

3. Using a large heavy-bottomed pot, heat the oil. Add the chopped onion, paprika and chard ribs and cook over medium heat for 5 minutes.

4. Add the chard leaves in batches, cooking and stirring until wilted, about 3 minutes. Season with salt and/or pepper to taste.

5. Add the raisins and the stock, cover and cook over medium-low heat for 5 minutes, stirring occasionally.

6. Drain the chard and transfer to a serving dish.

7. Drizzle chard with the vinegar and maple syrup. Toss. Top with toasted cashews and serve.

This is a fun Blog Hop that I joined, thanks to my dear pal Susan, who is a host for this month’s theme, #Greenslove. 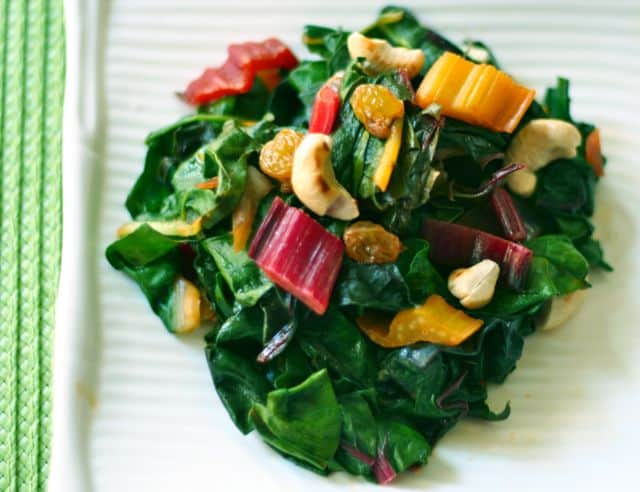 31 Responses to Eat Your Greens! Rainbow Chard with Raisins and Cashews