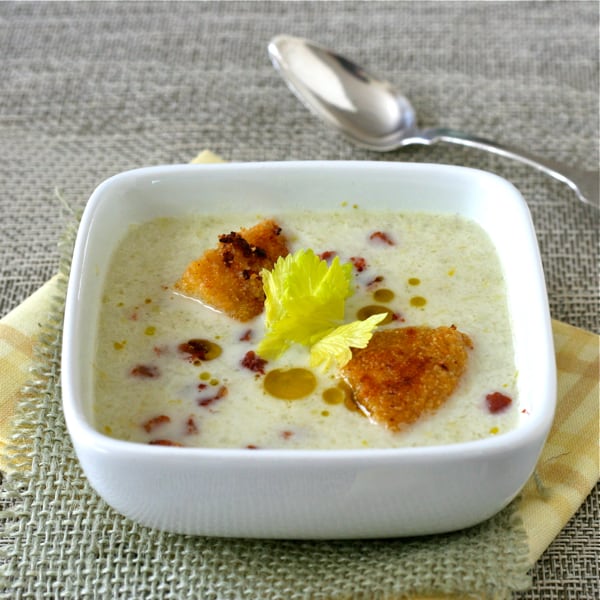 I’ve always thought celery was an under-valued and unappreciated vegetable. My mother used it all year long in her cooking, back when I was growing up in Pennsylvania. It was something she could buy all year long, even during the long, cold winters. She taught me never to toss the flavorful leaves and that celery, being naturally high in sodium, was an important aromatic ingredient in so many dishes.

When I saw a recipe for celery soup in the current issue of Food & Wine, I decided to tweak it a bit for this week’s new soup recipe. I’m always on the lookout for healthy soups that are reasonable low in salt and the naturally high sodium level of celery does not preclude our using it.

The first thing I changed was to cut the recipe in half, just being a family of two adults – and one cat who doesn’t like soup. I had some leftover low sodium chicken stock that I added, and I had corn muffins in the freezer to use instead of regular bread. Trader Joe’s sells diced pancetta that appealed to me more than bacon. There was a little cream left in the pint in the fridge, so in it went instead of sour cream. The F & W recipe called for a citrus-y olive oil, but I had a good bottle of white truffle oil that won here.

TIP: I got a smoother texture using my standing blender, but an immersion blender works OK and is a less messy process.

TIP: I always buy organic celery and frequently find that the price is only slightly higher than non-organic.