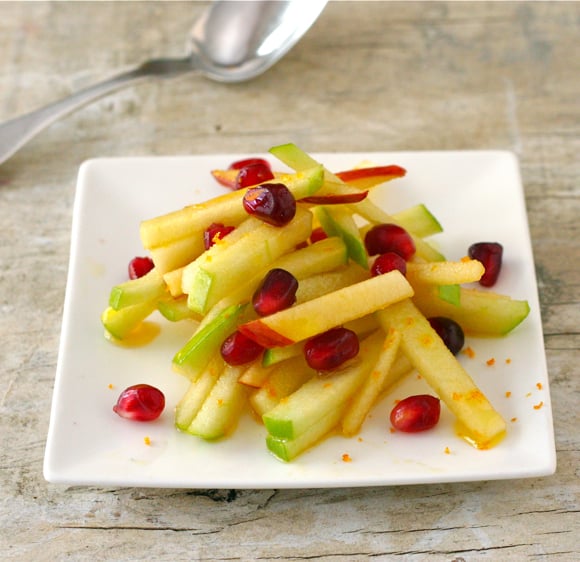 We eat lots of salad at our house and it’s easy to fall into a rut of the usual greens with vinaigrette, night after night. This week, I wanted to fix a slaw that included fruit, tossed together with a sweet-sour dressing.

Inspired by a recipe from Martha Stewart for an apple slaw with a caramelized cider vinegar dressing, I grabbed a couple of apples and whipped up a tangy vinaigrette. I added a handful of pomegranate seeds, known as “arils, so pretty and in season now, passing on the rum-soaked raisins that Martha’s recipe suggested. I wanted only light, bright flavors for my fruit slaw.

For my olive oil, I used a blood orange-infused olive oil that had been a gift from my friend, Marilyn. Playing with flavored olive oil has been a fun experiment, and the citrus note scented the dressing beautifully. Taste your vinaigrette before adding any salt and/or pepper. Mine was fine without any additional seasoning.

I found that there wasn’t enough dressing in MS recipe, which called for four apples, so I suggest you double the vinaigrette recipe if you are feeding a crowd. Two apples worked fine for me.

TIP: This time of year, you can find packaged pomegranate arils in the refrigerated area of your supermarket’s produce section. Breaking down a whole pomegranate can be pretty messy and leave you with fuschia-stained fingers.

17 Responses to Apple and Pomegranate Slaw